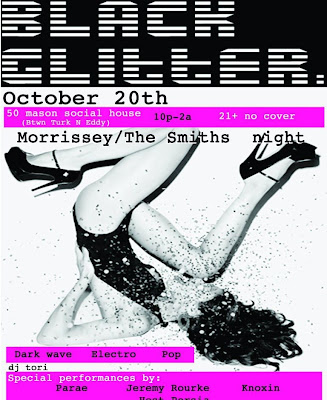 The party was in full effect.
The crew and I arrived just in time to see the band "Parae" in Action and they were amazing. Sexxxy Trans Punk Band. They RAWKED out and had the whole crowd "coochie popping on the dance floor"
PLEASE PLEASE PLEASE check them out! 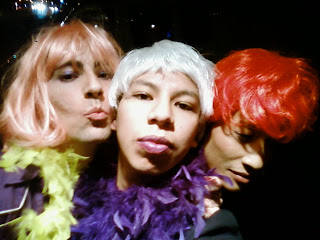 "Black Glitter" is Definitely the best party in the city thrown once a month on a Thursday night. It is worth being late in the morning and sleeping in. Trust me. I woke up in true bliss this am even though I overslept. I had the Black Glitter Afterglow!

Shout out to Dj Knoxin for rocking the crowd. He played this remix of San cha (papa Coochies) track "Crown Me" that gave me mental orgasms.
Crown Me - knoxin remix by San Cha

Check out some photos that I stole from Daniel and Per Sia's Facebook. :P 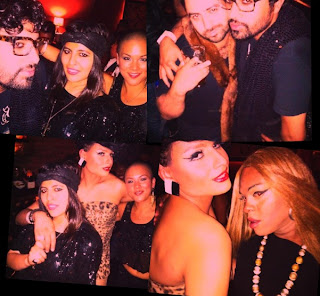 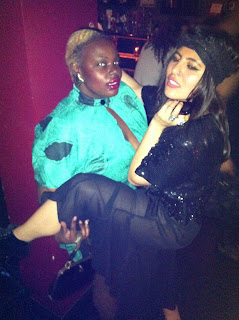 Per Sia (Host and Performer at Black Glitter) and I 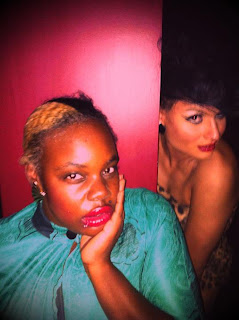 Black Glitter is thrown Once a month at the Social House on 50 Mason St.
The Fab Black Glitter crew is Daniel, Persia, Sancha, Jessie, and Fabion..
Congrats to those cool kids on such a fun successful event. They keep the party Cranked. :)

The next Black Glitter is on Nov.17th! 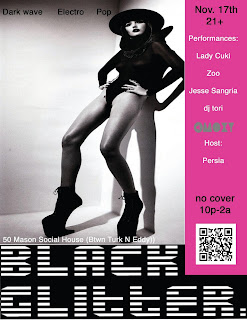 Oh and I will be performing at the December/Holiday addition of Black Glitter!
YAY! Because my Papa Coochie Loves me!