Are you ready for some Football, Little Birdie?

Well today, Inadvertently, My friend called me up and said, "Hey, Lets go see the Raiders play, I got free tickets!"

So I, Maya Songbird, went to my first football game today and this is a recap of the experience.

We pull up to the stadium to see a full parking lot, so we found a weird parking scenario across the street.

It was a little shifty but they guaranteed us we were ok to park there.

We then hiked for a long time it felt and experienced people selling tickets and trying to purchase tickets and various lame pick up lines. Some people were even grilling and cooking in the parking lot and my friend told me they were "Tailgators" lol

Our Journey to the stadium was super long and We were total Geniuses who both wore heels. Won't be doing that again.

Anywho, we end up in the stadium and were rushed by all the obnoxious raider fans. (sorry raider fans, I am going to have to diss you #BOOOOOOO.) Yelling out RAIDEERS every five seconds like a bunch of weirdooooos..0_o

I accidently knocked a drink out of someone's hand and all I could say was sorry and like blink my eyes a few times..Raider fans totally scare me. I feared he wanted to smack me.

We then headed to our temporary seats and I had no idea what was going on, but I truly enjoyed the fight for the funny shaped brown ball. 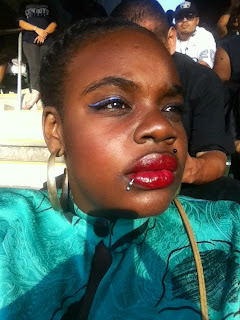 (Picture of me pretending to care about the game)

Then the cheering and rioting stopped and the men in tights exited stage right and in came the cheerleaders who provided the audience with Synchronized dancing. They danced to a song by Nsync! I got pretty excited!

We then made our way over to our true destination..#The Skybox.. Where we indulged in great free liquor and free food. There was even Cotton candy. Yay. 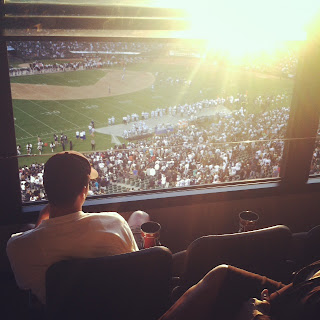 (yay Bitch! I'm in a skybox like that one episode of Martin)

The Skybox has to be what heaven is like and its where God sits and watches our lives play out like a football game.

You see I saw the game pan out like a game of life, and was purely delighted by the movement and attempts to make a touchdown.. and of course the nice dancing break with the hot chicks. Those girls could really dance. I need them in my life all the time ready to dance in honor of my #Touchdowns! lol And Maybe I am strange but I was fascinated by the diving move that the football players aren't afraid to make. For Sure football players were not afraid to jump off of refrigerators as kids. I love the fearlessness in the game. What a sport!

And when the game was all over, everyone stood up like the end of church and walked out...
The screen in the skybox slid down and there was nothing left to see..

We then took the last of the goods in the skybox and cut out. That's right. We took the Pizza and some beers. :)

We almost didn't make it to the car with the pizza though. Seems Like raider fans love pizza and would do anything for some pizza, even make some pretty demanding threats.

In closing, I look forward to enjoying my new favorite sport..football. Only for the Touchdown moments and the dancing. Men in tights aren't that bad either! YAY!